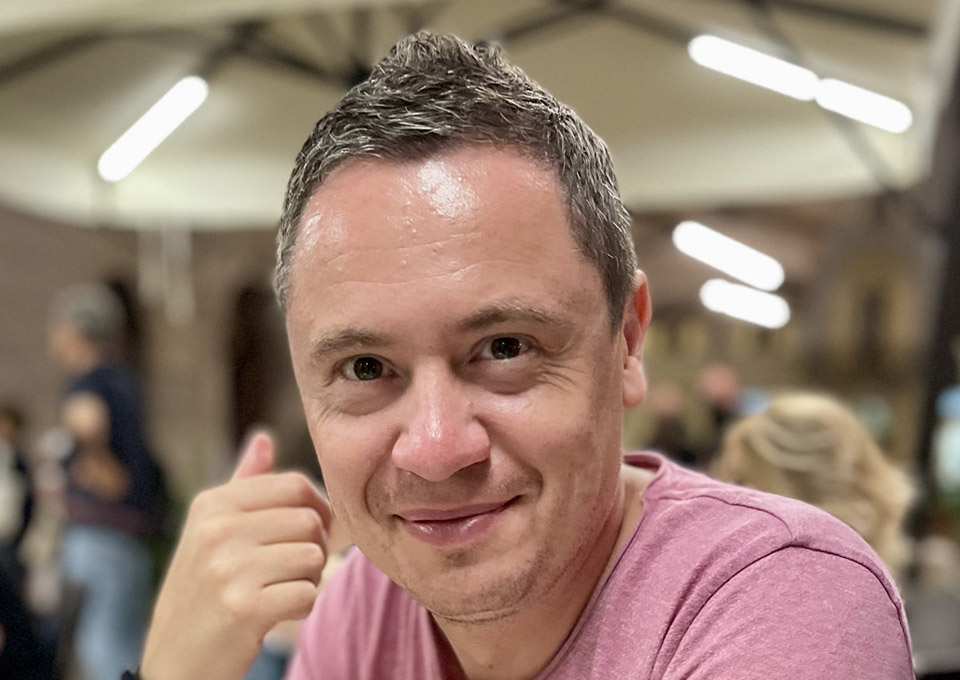 It’s interesting to see your background, which is more technical and to know that for many years you also worked as a sound engineer. Could you tell me more about how did you take your way up to the HR Director position?

That would be a long story, but yes, I worked for 10 years in various radio stations before I came to Lenovo. Here I first worked my way through various technical positions before I got the opportunity to lead the HR department. I’ve always been a bit of a “fan” of everything related to HR and I enjoyed working with people, so I’m glad I gave this change a chance when the opportunity arose.

Do you remember at what stage in your life you joined the LeadINcenter – Atairu Authentic Leadership program?

At that point I was already HR Director. It was a challenging time, especially the beginnings in a new position. I dealt with a lot of different cases, the whole team broke up (transfers abroad, maternity leave...). I was left alone in the department with a few less experienced colleagues.

Of course, at that time our company had already been cooperating with LeadINcenter (ATAIRU at that time) for a long time and I was hearing nothing but praise and good feedback from participants of the women’s programs. So I didn’t hesitate when the first men’s program opened and I joined it.

After completing the first module, I went straight into the “level 2” follow-up program because it really interested me and made sense to me 😊.

As a participant in the first all-male program and someone who also endorsed the AAL program to his female colleagues, how do you feel about the fact that these programs are gender-based? Do you see any benefit in this?

Ugh, tough question. But since level 2 was already in a mixed group, I can partially compare from my own experience. In the first program, the homogeneity of the group was a plus, probably mainly because it allowed us to open up on topics where we wouldn’t have dared in a mixed group. After all, we men can be quite vain 😊. In the second level there was a different dynamic, all of us had done a lot of work, and so it could work well again.

Do you remember any strong “aha” moment from these programs?

I remember one particular situation. It was not directly during the workshop session, but when I later applied something that we learned there.

We talked about situations when people are arguing about an issue, that it is very important not to take those arguments personally, especially when it comes to business. We shouldn’t get “pushed” into something or get carried away by emotions (even if the other party tries to make the attack personal).

A few days after this conversation with Eva Štefankova, I had a meeting with the management where I found myself in exactly the kind of conversation where the two of us were “against each other” absolutely convinced of our own truth. I remember the exact moment when I saw that my colleague was getting indignant, so I physically moved a little further away from the table. I created some space and said to myself that “I have my opinion, he has his opinion but he is not attacking me but only my opinion!”. And when I told myself that, it was just easier to have that discussion and we closed it somehow more or less constructively.

So the “Aha” for me was that moment when I was able to recognize what was happening and to make sure that the potential conflict did not escalate further, that awareness that this is how it is supposed to be done, that “this” is exactly what they were telling us about in the workshop.

Have you been able to use any of these programs in your personal life?

I must admit that I bought this program for my wife as a birthday present. I really wanted her to try it for herself. For one thing, it helped her through a difficult time when she was returning to work after maternity leave, and for another, it made it easier for us to communicate, for example, about the kids. We’re kind of on the same wavelength now, and we’re trying to have the right parenting perspective. 😊

With hindsight, what do you see as the added value of AAL programs in particular? What change do you see in yourself?

If nothing else, I can better explain the behaviour of people who behave in certain ways in certain situations, and that’s a big help. But not only to understand people and their behaviour, but on the other hand also my own self-management. To be able to not take personally the things that I come into contact with at that moment, not to take them home with me. This was always a major problem for me, to be able to switch off and not think about work problems, however difficult they are.

It definitely helped me in this way. Along with the ecosystem of the group itself, where it was possible to share and talk without having to elaborate on any details.

What would you say to managers who feel that they have been through “so much training” that it doesn’t make sense for them to enter into yet another development programme?

I would say that the AAL program is not a training in the first place. That’s what the program leaders told us at the beginning, and they were right. 😊

I also explain to the new managers we send to the programmes that they shouldn’t think of it as training, as it really is a transformational programme that can help them with stress management, resilience and understanding themselves and their staff.

In other words, it’s not a training where they’re given materials that they study and learn right away. I see the AAL program more as an opportunity to understand what people are like, how and why they behave the way they do, and what I can do about it myself.

I don’t want to sound pathetic or cliché, but it really is something that can change a person’s life!

I’m not saying that you can’t come up with the same ideas that I’ve come across in LeadIN somewhere else, but the way your team does it and the way the whole ecosystem is being put together, it’s a very unique product.

I can say that I am very glad that we have the opportunity to send people to it at all.

Have you encountered such positive feedback? Or is it just your personal experience?

Many people have thanked me for this. They appreciated that we gave them the opportunity to join the LeadIN program, some people were on the verge of burnout, marriage breakdowns... They experienced such major changes in their lives that “suddenly” they were able to perceive the circumstances differently, to understand them in a different context, and therefore they also started to “live” differently, they were much more OK. 😊

Of course, for this to happen, one needs to be open and ready to give these changes a chance. We have also had a few cases, not many, where this programme was not a good fit.

I understand. It’s certainly challenging to be able, in a large corporation like Lenovo, to set up the whole process of selecting candidates so that people who are really interested in the programmes get into them.

I would say that’s the hardest thing. Even now, we are looking for ways in which we can identify those people who are the most suitable candidates, for example, for the Young Professionals programme. I realise what added value it could have for less experienced colleagues who are at the beginning of their career and that’s why we are trying to set up the whole process. Ideally, the managers – the graduates of the programmes – would themselves identify their team leaders where the programme could fall on fertile ground.

Let’s change the topic, let’s learn some more of your private life. Can you tell us how you personally recharge your “batteries”? What is your favourite activity?

During the pandemic, I returned to at-home DJ-ing. So back to those radio days of mine when I used to occasionally play at discos 😊. I was never a well-known DJ, I just enjoyed it, so now I’ve bought myself a little device to mix my music on. I really enjoy it. Plus, my kids, that’s another type of exhaustion, but with them I just switch my head off from work. Those are probably the two biggest areas where I “switch off” and “recharge”.

Can you really turn your head off with kids?

I switch off because I can think about other things, so I switch off from work. But yeah, I also like to read, watch sci-fi series, but that’s just ordinary stuff. DJ-ing is really my thing, sometimes I’ll put it all on and play. Also, our kids have a positive relationship with music. My younger daughter sings non-stop, it’s unbelievable how she moves around the house dancing and singing. It runs in the family, my father-in-law is a very big keyboard player (well, he thinks so 😋). We are a musical family. We have loads of records that we play, that’s our ritual too.

Finally, can you share with us your biggest achievement or something you are proud of?

I probably don’t have any particular achievement. From a professional point of view, I think that in 6 years I have managed to create an HR department that is respected in Bratislava. It also means a lot to me that people are not afraid to come to us and ask questions or approach us with questions or ideas, that we have achieved a kind of “customer orientation” because we are not here to create obstacles, but to help people.

I am always pleased when I manage to push someone in the right direction, when I recognise the potential in someone, when these people succeed. It’s the classic coaching and mentoring that gives me energy and it’s always those interactions that get me going for the next day.

I am also proud that we have been able to promote various interesting benefits. These are things where I see first-hand that I do is working and how it brings real help to hundreds of people.

I will give one last example. When the war in Ukraine started, we launched a fundraiser to help refugees. More than EUR 30,000 was collected by our employees, and Lenovo donated another EUR 60,000 on top of that. Later, employees wrote to me saying that they were happy and proud to work for Lenovo. That’s the most an HR manager can achieve when people come or write to say we did something great and thank us.

I guess it worked out for me as well, when we had to define our passions and mission, I wrote that I wanted to help people in some way, whether it was to teach them something or to please them in some way, that’s what my mission is, and I seem to be fulfilling that quite well in this job. 😊